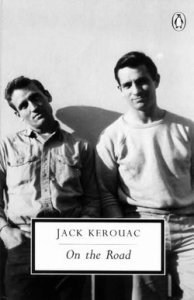 Like any great novel, On the Road has classic sections that read fresh and even more powerful when seen again years later. The most re-readable section of On the Road includes Parts 4 and 5, essentially the novel’s last hundred pages. This is by and large the Mexico trip, which can stand alone on its own raw energy.

Here you find Kerouac on a high wire writing super prose, tightly packaged in a limited timeframe. The episode exceeds phantasmagoria and becomes mythic. Characters loom larger than life within the land of ancient Toltecs. Dean Moriarty on the mountain takes on godlike characteristics. The Mexico account delivers the conclusive impressions of all the gang’s journeys. Their experiences have now peaked and they have pushed the envelope as far as they can. They then test their mortality and move close to the edge, near implosion, blindly expecting things to be resolved on their own accord. And, followed by some angels, they are. Mexico City, which they see as a sort of a Bohemian nirvana, quietly becomes the last stop. It’s the last Sal and Dean journey.

The romantic innocence that marked their earlier trips has gone, and they are in dire straits. They part ways, each suffering their own variety of illness (Dean’s is delusional, Sal’s is mortal). Restless Dean leaves, and Sal feels abandoned. Even back in NYC their bond never mends.

Within this last section, Kerouac artfully makes the symphonic tie-in’s with vital themes and major percussions heard throughout the preceding pages of his story. There is a completeness achieved, beginning with the moment the travelers become one with the Mexico earth and its dirt and insects. Then again when Sal hallucinates the end-game’s apocalyptic white horse. Dean the omni-visionary and perpetrator of convenient truths says he saw it too. Kerouac makes us see it as well.

There’s hard realism in these pages about the social devastation caused by hurricane Katrina. Maybe it’s as frank and true and graphic as you’ll find anywhere. You’ll read much about the disaster early in the book. Street-level. Then as pages go by, the more particular story tends to float and slog along with the murky waters of the flood. There is only so much one can say about hell and its parallels on earth before melodrama takes hold. Around the chaos of Katrina’s aftermath, Burke weaves a bad-guys-are-really,really-bad adventure. The pair of good guys Dave Robicheaux and his pal Clete Purcell strive to make things right. The storyline has its share of sudden shocks, twists and pitfalls, but I was wishing for the less-gloomy violence and pathos found in his other novels.

The narrative voice jumps from first person Dave to omniscient and back. It’s something crime writers often do, and they usually pull it off (to some extent) without any of their readers noticing. In this case, it may be overdone. I was prone to lose the narrative connection, that familiarity I had on page one when Dave talked about his time in Vietnam and its horrors. Burke’s POV “author” is conveniently all over the place. When we return to our man Dave, all the god-like narration in-between seems odd.

The New Orleans storm account (like the event and the nation’s reactions) is heavily laden with underlying questions of racism. Burke’s writing rides the razor’s edge between sympathy (for the flood victims) and loathing (for those who capitalized on the scene via criminal acts). There are some interesting factoids (and euphemistic epithets) thrown forth. For example: in the moments of urban rioting, there are two businesses that are always spared and not burned or looted (by the “Snoop Dog fans”)- funeral homes and the offices of bail bondsmen. Burke does not intellectualize nor direct this into a statement novel. There is a hint, but no mention of the “disaster capitalism” that Naomi Klein suggested as an intentioned by-product of Katrina. One thing for sure… lots of guns are everywhere, and that seems okay with everyone. In that sense I found the story angle a bit Republican in flavor, and it made me want to put the book down or at best hurry through to the end.

The Robicheaux books are written to be simple and very personal (with the hero’s touching family scenes, etc.). The texts have a salty Gulf Coast flavor, not unlike David Lindsey’s Houston detective books. Difference is, the hero of Lindsey’s series, detective Stuart Haydon, drives a Jaguar and has refined West University sensibilities. Dave R is simple and down-home. Whether in New Orleans or New Iberia, he’s an enlightened blue-collar Cajun type. The story is what it is – a fiction writer’s vision. But the account — the factual witnessing of the atrocious and tragic events during and after Katrina, that’s really what sells the book.

I give Burke a lot of credit for telling us about it without being unfair or sensationally biased (as most of the reporting networks were). Whatever made-up story Burke put around it was to me immaterial. Far as I’m concerned, Dave Eggers successfully cornered that aspect of things in his Katrina novel, “Zeitoun.”