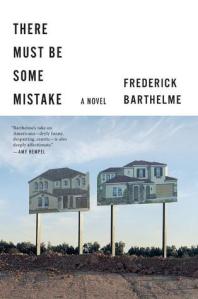 We see some familiar touches here: the divorced aging male, his loyal friends and still-attached relatives, his exotic lovers, and an exurbian condo setting replete with nearby secret forts, i.e., the Velodrome and its tiny Airstream trailer section, reminiscent of the getaway airplane cabin wreckage in the woods in his novel Tracer.

It’s a cozy read, never strident and true to the world we live in. Well, maybe the plot and its neighbors falling like flies is a stretch, but that doesn’t matter. At the core, it’s a novel about community and one man’s place smack dab in the middle of one. That sounding board being Wallace Webster, who works for an ad firm and prefers the simple life where one draws wider focus from a narrower view. Wallace seems a level-headed dude with lots of sexual prowess. The other guys in the neighborhood are flawed and bumbling men, several of whom die. Ok, so Wallace is the community’s fiftyish years-old chick magnet.

We get interesting characters. A girlfriend (Jilly) who cracks lines like a female Morey Amsterdam;  a couple of spooky female survivor types from Jerry Springer land (Chantal and her daughter); some nosy HOA type people, a fluffy-brained police investigator with a cozy name (as in “Detective Darling”), and so on. There is an air of female veneration.

Included are lots of everyday trifling details that draw our interest, like the guilty pleasure of late-night Saltines and butter. Barthelme does not shy away from today’s world of iPads and Facebook (in a direct hit on modern American behavior, Wallace says when a question comes up, “I can Google it. Right now.”). He includes tech culture and its niggling devices and sites, alluding to their complications and influences in our life but not to the point of admitting dominance. It’s good to see, and as many writers know, not that easy to do (it’s easier for many writers to move back the clock).

The dialog features a boundless supply of erudite cleverness coming from the mouths of all the major players, despite their unpretentious existence (with meals at Wendy’s and the Olive Garden). The community described is out in the bleak coastal plain community of Kemah, sort of rural east Houston (if I recall, there was a beer joint in that area back in the 80s called Maribelle’s which Velodrome somehow dredged from my memory). It must be exhausting for Wallace and his lady friends to constantly address every little aspect of life in such cute terms. The go-for-a-quick-ha-ha aspect of some of the dialog can ring false sometimes.

Then there are those longer discussions, the All About Me background ones, in which a character talks about himself in interview fashion while the avid listener adds prompts and queries and then responds like a chorus with affirmations and touchés. Barthelme has also drawn some from his personal and family past in portraying Wallace as son of an architect and as someone who was involved in painting. In one section I had the sensation of reading the author’s memoir notes.

Webster has a tendency to tell people everything. He’s about involvement and even confession rather than detachment and reticence.  That’s good for making fiction.