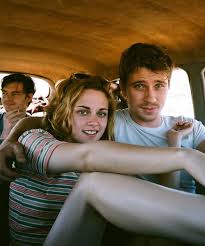 Expecting some other mood to the presentation, I was distracted during the first half.  The screenplay emphasis is on free beatnik love, I suppose. Anyone with everyone, we get it. After repeated scenes like “Dean does Denver” the movie was beginning to seem like the Kristen Stewart SkinFlick Hour. It sells tickets, they say. And there’s no doubt she is nice looking.

I wondered why the opening half didn’t have more emphasis on Sal (Kerouac) the writer and his paradoxical visions of beauty and anguish, of life and the American culture, the countryside and its soul.  Instead we get endless cigarettes and a repetitious display of Dean’s (Neal Cassady’s) fancy for nose inhalers. They gave us bebop music scenes but that was only one facet of Beat. Beat was about absorbing everything, living in the moment, not just Dean’s capacity for getting laid.

I’ve read the book more than twice, and never saw in it things the director included.  I barely remember reading parts about Jack’s mom, and the movie showed her several times. The movie says Sal met Dean “after his father died” which is conveniently inconsistent with the book, in which Sal meets Dean right after Sal and his wife have split up.

OTR has no real compelling storyline.  It must have driven the screenwriters crazy. Other parts are great: the visuals, the editing, the building interest in the guys as they journeyed through their passages. Good actors appear in bit parts.  When Jack K’s writing was quoted, those narrations raised the hair on the back of my neck. The Ginsberg quotes did the same.

Once Dean’s unhappy wives leave the script, the movie improves.  The road scenes are good, the William Burroughs scenes are vivid, and the Mexico sequence artfully depicts a drunken nightmare of a trip.  From that point, the novel (slash movie) hits its stride and pushes to a conclusion.  At the end I felt like I had watched a movie of some merit, and one Francis Ford Coppola’s name is rightfully attached to.