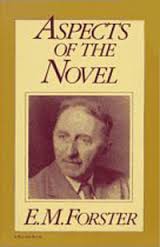 The wisdom and knowledge in Forster’s essays are revealed in direct proportion to the reader’s experience as a novelist.

Published in 1927, it is definitely not a book of quick-reference tenets set in boldface font, like we see in contemporary writing guides. Forster’s aspects are just that: aspects or features employed in famous novels that can be perceived and patiently considered, even modeled, by the growingly astute (and eventually graying) reader-slash-writer.

The range goes from what is story to the necessary ingredients, such as the required vitality of rounded characters and their expression through actions, to the intent of the whole and its weight by design. We get a few instructive gems along the way:

Consider what Forster discusses in the “rhythm” of a novel. Similar to the repeating “dididdy dum” of Beethoven’s Fifth, prose can have a recurring beat (cf. Kerouac and jazz). In masterwork novels, deeper rhythms are also at play and harder to recognize. These are persisting images or actions that play to our cognizance of theme, like symphonic leitmotifs in language. Proust, as shown in an example, does this sort of thing with food and plants and snippets of a sonata, items that are weaved into the overall product as touch-points to something resonant and more centrally important – something artfully made familiar to us.

Forster says there are novels of fantasy and novels of prophecy, and the second is higher in his regard because it addresses universal themes and reaches mythic proportions. His commentary and examples are intriguing, He invites us to read the great books and brings them alive by argument and illustration.

Forster dishes about major novels of his time and some prior to, including Emily Bronte and Wuthering Heights with a brooding milieu that is itself the ultimate mythic character; Joyce’s Ulysses (he calls it mud-slinging at traditional novel values); DH Lawrence (gets his high esteem as “prophecy” writing); character Scheherazade (the ideal story presenter using cause and effect plus suspense); George Eliot (grand, but valued more by quantity than artfulness); Melville (immense and grand, and the novel Moby Dick is a whaling yarn sandwiched by poetry).

By book’s end we have taken a survey course on Essentials of a Novel and can re-join Forster’s class and learn more on each annual visit. Provided we re-read carefuly and study in light of our own writing. His afterword contains anxiety about the future of the form, which of course still exists nearly ninety years later. Maybe the ongoing strength and perpetuity of the novel is due to on-going honor paid to many of the aspects described. Forster’s documentation is therefore, among other virtues, heroic.