Paperback is for sale on Amazon. Also available in Kindle and iBooks format. Can also be purchased direct from Lulu. 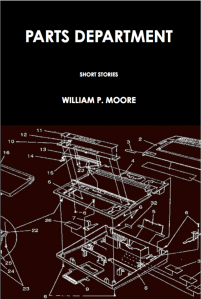 Nine short fiction pieces – a mix of dark humor with a dash of surrealism. Souls adrift, the blues, and the underlying quest for home and happiness.

NOTES ABOUT THE 9 STORIES … by the author

The collection begins with a story about home and location with the protagonist wondering “where to go or what to do next?” It ends with a story of the same type. This led me to the Faulkner quote as the epigraph.

Story 1-  Bayberry is a wayward character long-held in a dusty trunk, a figment on faded typing paper. Here he’s cut to size and freed to the public page, surrounded by haunts and strange visions…and thereby buried for good (along with any other attempts to describe Key West).

2 – Written in appreciation of Hemingway’s “After the Storm.” I had an idea of layering and humans living in husks. I wanted to use a squabbled-over domestic treasure as opposed to a sunken ocean liner.

3-  “Advanced Level of Play” could have been more about Masked Man but the road led to video games and to Stan Birchard, a reclusive resident from Oceanaire, who crosses over (as do others in later stories).

4 – “Along the Fall Line” is adapted from a fragment left on Oceanaire’s cutting room floor…a scene with a pretty girl on rollerblades. Having it take place in Columbia, SC was the biggest leap. The theme of “fall from grace” fit the river geography and set up the storyline.

5 – “Orange Bowl Days” is an attempt is to make memorable characters in captured moments…odd moments maybe, like Ulyanna in the tub studying a pharmacology book, or the South Beach scene with Harry and writer Ralph Z. Dupree. At one time I wanted to write a novel using the line (which I like) about Harry being choppered off a fishing boat, but this was all it was.

6 – The next two stories are tied via Teri and her mother Anna and crazy father John. They seemed an inevitable part of the collection, gloomy as they are. Maybe some will see humor.  The niece character Shannon is a reimagined representation of a girl I knew when a teenager in Sandbridge, VA. She lived in her aunt’s house that summer, but in real life didn’t disappear from there…she disappeared from me.

7 – Is mercifully short. A shot, so to speak, at Southern Grotesque. I liked the name of Soso as a town. Visions of a place like Soso (plus a real-life 2015 drive to Aiken on a bleak country highway) started the whole setting. The ruined scenery evoked an atmosphere of mediocrity and nihilism.

8 – “Blue Chile” steals again from Oceanaire, using the character Beto the flight attendant. I appointed his sister as narrator and opposite personality type. It is a morality play of sorts, involving faith, situational ethics, religion, and even a bit of sibling rivalry.  The lawyer /wheeler-dealer character Eligio Carnación crosses over from Oceanaire.

9 – Some familiar names pop up in the last piece. It’s a New Orleans vignette, a slice from an abandoned sequel to Houston Chemical. This story also has character intersections with other stories and novels. Those sort of ties matter to me in my fabulist world. I don’t expect others to realize the connections; at best they raise curiosity.